A couple of small additions to my Tzeentchian Warband before the year is out, hopefully 2022 will be a better year for the Church of Transmogrification.

Brother Jest of the Outer Church

Brother Jast had always been a religious man, but never a humble one. Raised a devotee of Sigmar, he had been a thorn in the side of the priests with his wealthy family affording him generous donations that always came with price and a demand that his voice be heard.

Jest had always felt blessed and elevated in the eyes of the Gods but unappreciated of the earth and after arguing with the local priest for the last time he stepped into the Church of Transmogrification, maybe they would be grateful. Grateful they were for his patronage and flattered his ego until he had given all and took the Lilac Sacrament. The hand of Tzeentch reached out and blessed him with pale wings and his ego soared to new heights. He boasted of their beauty and revealed in flights between the colonnades of the church Halls, announcing to all that was amongst the favoured and would soon be blessed again, to join the Churches Cherubim and then on to daemon hood  and to stand by the side the Great Changer!

His words were heard and the next time he took Sacrament he was brought low and his wings were shrunk until he could do naught but hop, his bright mask burnt and twisted and became a comical grin. Jast became Jest and now serves as a bloody Fool for the Church and still dreams of flight as he perches and drops with his mace

Brother Marc of the Outer Church

Marc had ended his life before the Church found him as a thief of poor skill and little luck.

Born to a family with a little land, he was the third son and had inherited nothing on his father death. Unwanted at birth and unloved at home, he had been encouraged by uncaring brothers to seek his fortune away from them and in the town. They had given him a small sum of coin and their fathers sword to bribe him on his way.

But his older brothers had no desire to give anything to him and had plotted for their farmhands to set upon him like brigands when he reached the town and take back all that they had given. Beaten and robbed, the town only saw yet another filthy worthless dreg, his protestations and pleas for help as only begging lies. Desperation drove him to steal, but unskilled and unaccustomed to his new life he was caught by the town watch and punished. His ears were cut and he was pilloried for his theft. Further undone he was found by the Church who took him in and showed him his first kindness and he gladly took the path they offered. Healed of his wounds, he now bears the drums of service and beats out each step on the Changers Way. 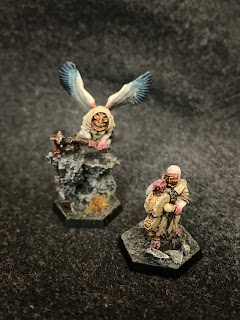 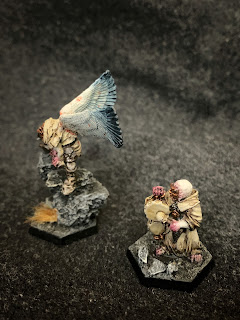 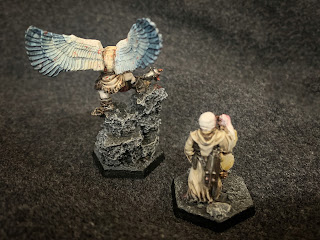 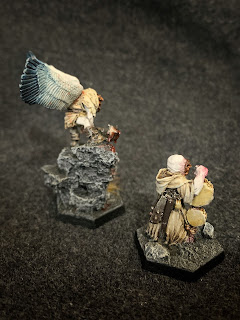 Brother Jest is a C12 Citadel Goblin Splat with a set of wings I found in my Bits box. Brother Marc is another figure taken from the Red Redemption set 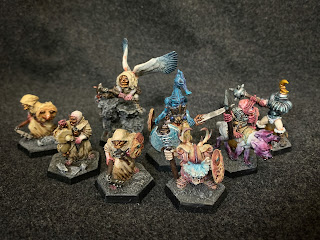 The Church of Transmogrification revealed so far