With 15mm gaming and painting (well painting so far!) my wargaming bug has been well and truly woken up. I have been considering a return to Games Workshop for some time and with the release by Forgeworld of their Mechanicum forces and now by GW itself with the Skitarri it has kind of decided it for me.
Ever since I read Mechanicum by Graham McNeil (set during the outbreak of the Horus Heresy)  I have been looking to delve more into the side and along with an Inquisitional Warband  appeal to me the most. They both have a strong Steampunk feel and tap in to the Heart of the Warhammer 40K story with their techno medieval appearance and ideology. As a painter and builder the Mechanicum offers a lot of scope, not just on adapting existing figures but the potential for unique pieces and highly personalised equipment and appearance.
In preparation for a Mechanicum army I have just finished rereading Mechanicum and have started the Priests of Mars which is the start of a Mechanicum Trilogy also by Grham McNeil.
Over on my Pinterest, I have set up a Adeptus Mechanicum board for inspiration:

Email ThisBlogThis!Share to TwitterShare to FacebookShare to Pinterest
Labels: Forgeworld, Games workshop, HorusHeresy, Mechanicum, Pinterest
2015 has been a busy year so far and I have got into quiet a few games and amassed a whole host of new mini's to paint up and extended my scratch build plans list again. Before i start on the catchup I thought I would post up a new company called Macroscosm games who i came across on one of the Facebook groups for Necromunda. The initial run of 28mm figures are for the Malignancy who are an underground cult infected by an alien virus with the figures in various stages of infection.
The miniatures are fairly generic and could be used to support factions in 40K, Necromunda as well as the companies own system and verse which is available free on the site. 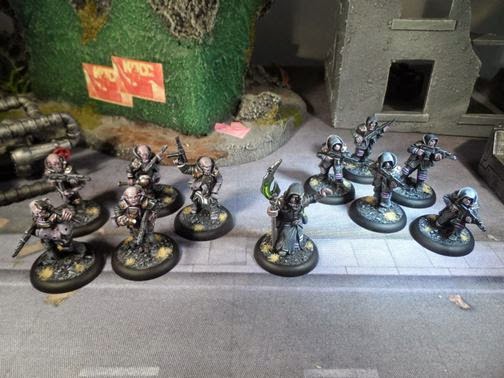 
Macrocosm Games
Posted by Benamon at 03:15 No comments: