This weekendI have mainly been resetting my workspace. I am lucky enough to have a whole room for my hobby but despite all the room i still manage to over fill every surface with half painted figures and projects,
Clearing some space I was able to run through two little pieces for my Epic/Adeptus Titamicus collection.

The first is for a planned Imperial Guard force that will initially be based around my Epic city and besieged PDF force.
i have always loved Airships and plan on creating some arial units to use as alt Titans and picked up a  very small Hindenburg model which will count as Knight and will represent a light one man scout Airship. 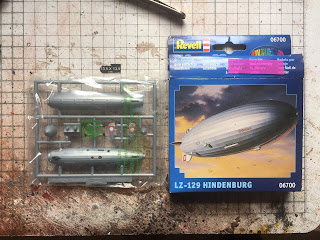 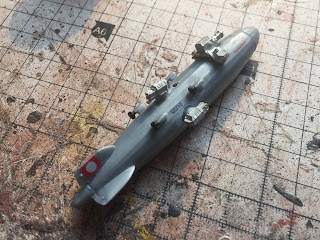 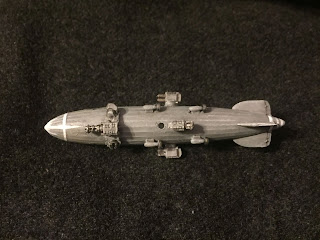 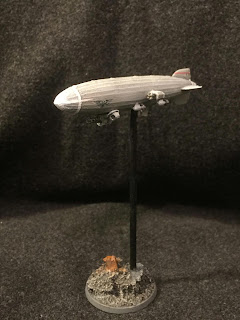 the Airship stands on the same base size as a Knight 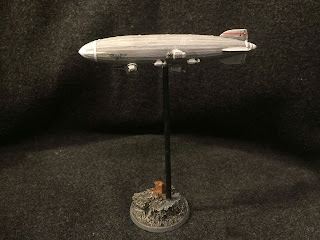 The base and stand should blend in well with the city (photos coming soon!) 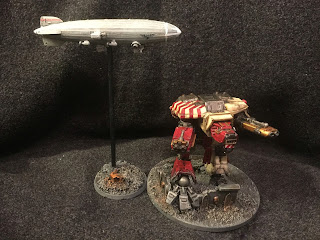 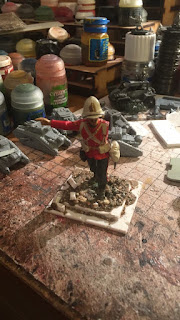 As a bonus while sorting I found a Hatchette collectable figure I had been given and wanted to use as a terrain piece. The figure had one arm removed to add some war damage and based on Foamcard 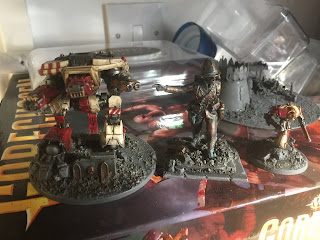 Figure was painted up as old copper and should make a nice addition to my cityscape. 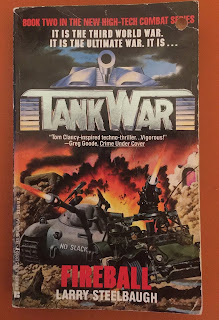 Many years ago I picked up a copy of Tank War - Fireball by Larry Steelbaugh. Despite never having read the first book it made for a good read and I have lost count how many time I have read it.

The book is set just after the outbreak of WW3 and a Cold war setting as Soviet forces invade western Europe. The story focus on exploits of the battle tank XM-F4 'No Slack Too' and a group of gun buggy Jager-Komandos as they fight behind enemy lines.

Inspired by the book I have started work on a buggy and tank force for my Ion Age collection and ties in with my image of the Prydian militia being used more like scouts and rangers in the Lithic Assumption. The final force can be adapted to serve as an element of a  Condot force or to operate being lines following a Shia Khan invasion

The tank will be an easy pick and I will be using a Taranis main battle tank. 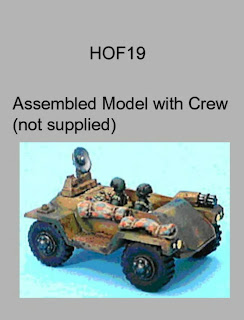 For the Gun buggy I drew from my bits box and found a very old metal Alternative Armies scout car. These have not been sold for some time but after contacting Gavin Syme he was able to identify the miniature and even locate the mold so i could get some more! 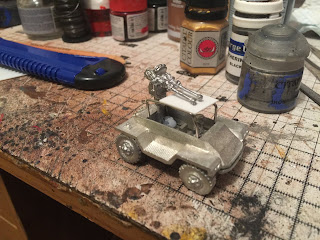 first sketch make to check that the idea would work, though this was a little too Fighting Golf Caddy! 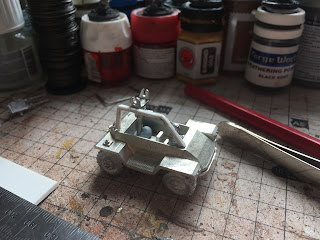 Frame made with 5mm plasticard 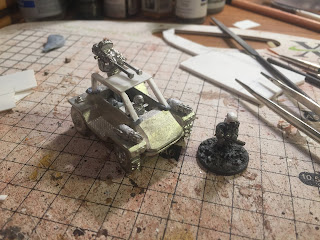 Assembled design next to a militia figure 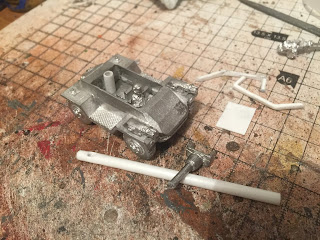 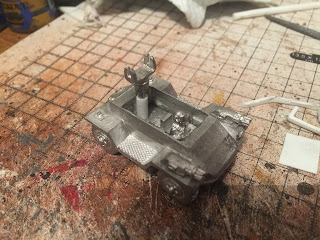 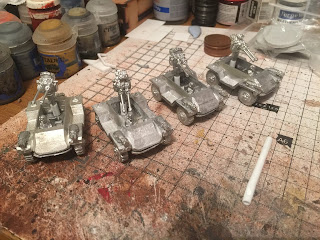 Four cars off the assembly line ready for the canopy to be added.

addendum - I have recently got hold of some more of the series so I am now finally reading book one!