The Drunaad Book of Grudges.

A creature is at its most dangerous when it is cornered and fighting for its life. For the Goblins of the Black Beetle tribe it was certainly true. The tribe had been driven from their lands by the expanding conflict between Orcs and men and their migration took them to the foothills of the Pillar Mountains where they encountered the dwarf city of Ruknaast.
Ruknaast lay within the base of Mount Rukk with its fortified entrance opening out onto a broad valley  which was closed off by a wall of lesser mountains with a narrow gorge which  led out of the mountains onto the plains beyond the foothills. The gorge was defended by another wall and gateway, the Redwall.

It was to the Redwall that the ragged caravan emerged and in the failing daylight the dwarven guards mistook them for dwarven refugees. Hidden beneath rags and carrying what little they had fled with, it was an easy mistake to make but one that would cost them dearly. The gates were opened and the needy were welcomed in, but as the first caravan passed under the gateway torchlight revealed the truth.
The Goblins had sworn that they wouldn’t be defeated and driven out again and their desperation had made them fierce and even as the guards rushed to close the gates they knew it was already to late. The tribe poured through the gates like a filthy green tide and then flooded on into the valley, already screaming their victory.

As one they charged into the valley and from their lines their bird riders emerged and took the lead, the element of surprise still with them as their manic charge took them to the gates of Ruknaast before it could be closed.
Without the sounding of Redwall bell, the Doors of Ruknaast lay open and to the last bird the goblins held the great doors open until the main horde arrived and took the fight into the city proper.

The Halls and corridors became choked with dwarf and goblin dead, but step by step the dwarfs were forced back until at last only the throne room remained unbroken. It was here they made their last stand.
King Athel Baranson and his Hearthguard faced the fury of Chief Fannag atop his giant stag beetle steed Unger.
Like an Obsidian steam tank, Unger drove deep into the Hearthguard and laid waste to them while above it Fannag spun around and danced to cut and parry each blow that might have struck Unger.
The Hearthguard fell to the fury of the giant war beetle  and Unger cleared a way on to the throne where Chief  Fannag flung himself down upon King Athel following his spear. King Athel saw him leap and met the shaft, turning it aside with a swung of his  great axe. But Fannag was fast and cunning and as the spear was pushed aside he released it and kicked himself off into the kings exposed side with his dagger.
King Athel felt the blade slip deep between plate and rib, and his eyes grew dark while the last of his kin fell beneath the shadow of Unger.

Ruknaast had fallen and Goblins began to rebuild and make it their own,  the taste of defeat and desperate flight,  how close they had come to destruction ever present on their minds and shaped the decisions of those first new years.
The goblins took the mines and forges and as the dwarfs before them, a love of iron.To better stand against all foes they remade themselves into the Iron Guard, armour clad as their totem Beetle and an echo of the fallen hearthguard.
Redwall was renewed and raised high, clad in iron plate and spike.

Ever since I painted up the first of my Iron Guard I had a niggling in my creative head, whenever i put together a force I like to have a backstory and setting for them, but they had been left hanging with what felt like the remains of what i could remember from my childhood incarnation of them. With the Bolt Thrower crew on my painting table I had a good prompt to revise them properly. I wanted to give them a place and also a reasons for their armour. The new story for them touches on the reasons, their defeat and flight and then victory over the dwarfs of Ruknaast shaping of the tribes desire to remake itself and take on dwarven influences.

With the new story i looked again at those i had already painted and although I liked the white I felt it wasn't quite Goblin enough. For my colour palette i tend to avoid red as it can be an easy go to colour but in this case felt it worked perfectly.
Hooked on Game of Thrones the armour of House Lannister looks quite similar to the Iron Guard so I settled on keeping the armour but painting the skirts as deep red leather and the sashes a brighter red. 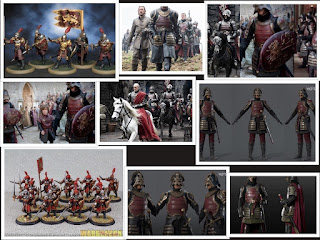 Lannister armour from the Tv Series and various online sources 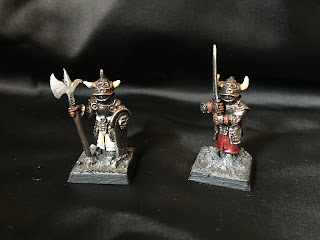 Old guard and a swordsman with the new scheme. 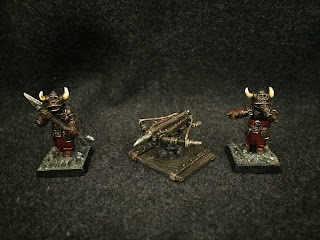 Completed Bolt Thrower and crew.
I have added a cable to the Bolt thrower and given the spotter a telescope 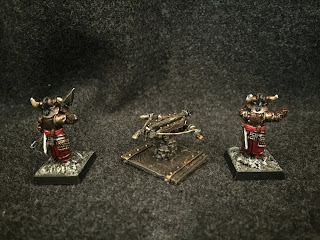 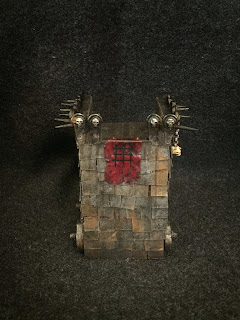 The completed Tower. The top has Iron Guard shields (made with Green Stuff) to help tie it in with the rest of the army and the Iron Guard banner with the banner of the Redwall unit, a stylised portcullis.
The tower will be pushed into battle by a bigger beast, possibly an ogre or troll so on the look out for a suitable figure. 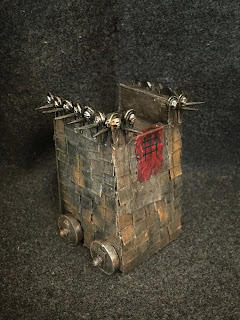 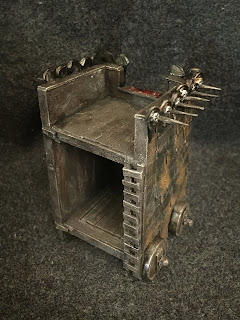 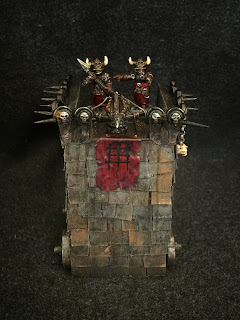 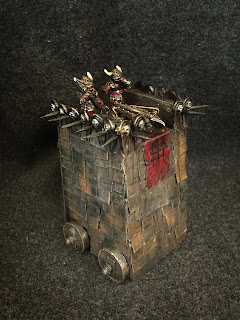 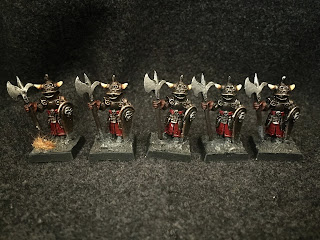 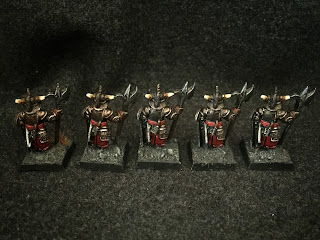 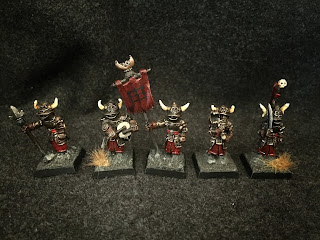 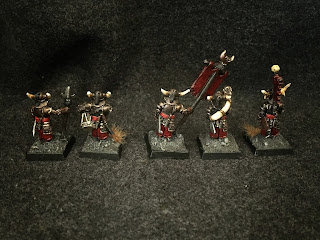 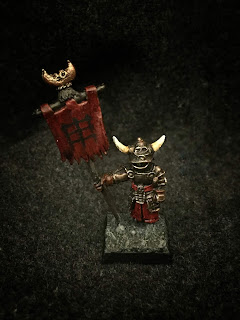 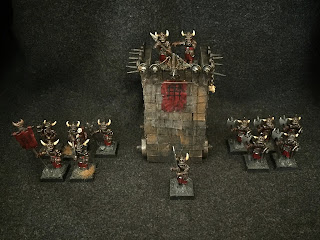