Fangor waited, the tent lay in shreds and broken barrels and other debris surrounded him in a wide circle while his guards stood far away and tried to avoid his attention.

He was not good at waiting.
The Vile Rune Tribe had answered the summons of King F'yar and were gathering in the mountains above Kachas Pass. Fangor and his bodyguard had arrived ahead of the main army to enlist the aid of the rock giant Guthrum Mane, who was now sleeping off the effects of several barrels fang or had missed, and to scout out the area with a unit of hired Half-Orcs who had mapped the best route through the pass and also succeeded in wiping out a force of elves on the way.
Fangor sick of the sight his own boredom marched out to the edge of the camp and looked out towards the mountain pass that led back to the tribes territory, hoping to see the rest of his boyz.
His lack of patience was finally rewarded as he picked up the faint chant of the Vile Rune marching roar and as it got louder the rust tinged cloud of the column on the road appeared and eventually gave way to the red and green ranks of the Vile Rune Tribe

The first ten Vile Rune Orcs are finished and have given me a good template for the rest. along with the rusted and dirty metal I wanted to go for very muted and earthy colours, different browns and dark leathers. 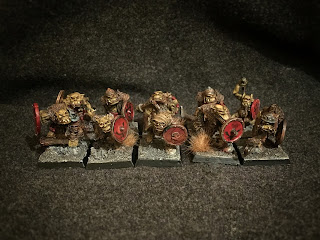 The Orcs are all metal and span across the ages, the variety and differences in size should give a real mob feel. 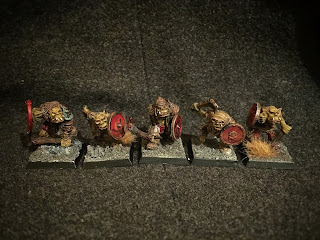 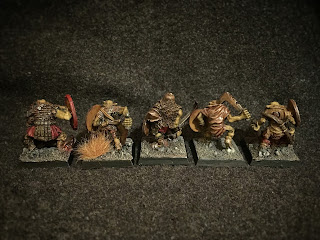 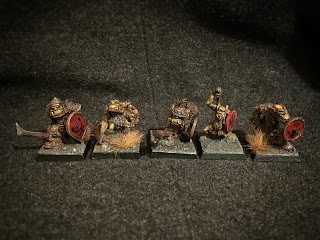 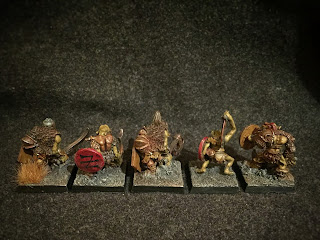 Hard to pick a favourite but so far it is the old long faced Orc with the gladiator style armour and torn off ear. 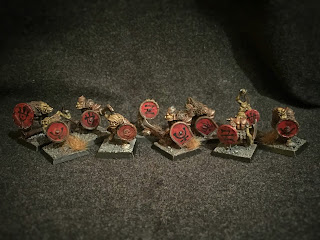 I had a couple of attempts at the Vile Rune screaming skull but my freehand just isn't up to it and it and the design was just too bright and stuck out compared to the rest of the figure. I had contemplated a version based on the newer Orc Glyph style but it didn't fit in with the vintage of the scenario so i have settled on using the Runes from the command sheet banner turned out well. 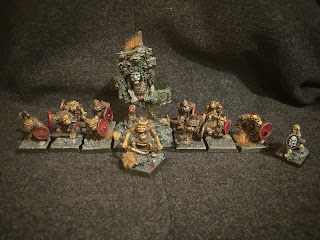 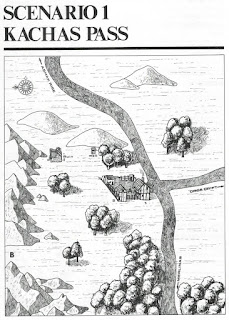 As part of the Bloodbath project I will be putting together all the buildings, terrain and extras for the scenarios. Going through the book gives me a To Do list:

I am undecided on the buildings, as to create new ones based on the card models or reinforced card ones

I had started on the roads last year but had not got any further than cutting the sections into plasticard so set to finish them off as part of my renewed drive.
The sections were measured to fit in the with the Bloodbath bridge and be modular. Texture and the banks were made using NoMorenails. Further details added with twigs, sand/small stone mix. 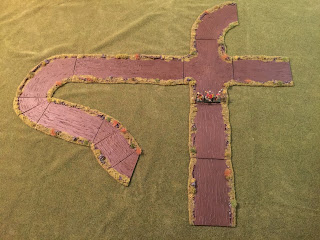 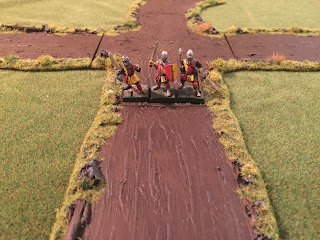 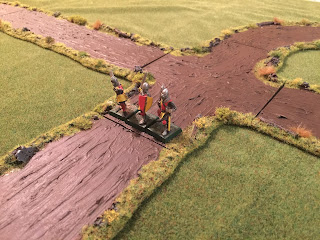 As January draws to a close I need to catch up on my blog as i have been busy painting and building, certainly a good start to the year. After so many years building up the collection i want to use this year to try and put dent in the pile and get as much as I can painted so have set myself the challenge of a Command sheet a month. For the human, elf or dwarf forces this should be fairly achievable but it is the large Orc units that twill be the big humps so for them I have allowed them to overrun into the following month if needed, which will defiantly be for this month!
With all the planned terrain i will also try and complete one piece at least a month, whether that be a set of roads or a building etc. 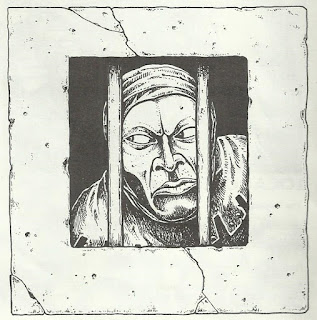 Continuing the Kachas Pass Orc Command sheet the last character is Silas Meel the half-orc spy.
There was no specific figure assigned to the spy so I managed to pick up one on eBay as a bargin, with et majority of the figures in the rage part of the pre-slotta era and being one of the races left by the wayside they can be a costly force to collect. 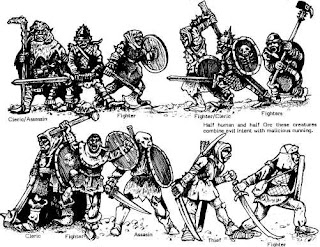 I don't really remember the Half-Orcs when I started collecting but they have an interesting backstory, shunned by both humans and Orcs and used as spies and underhand mercenaries. The figure was interesting to paint with lots of detail and character and reminded me of the depiction of Orcs from Ralph Bakshi's Lord of the Rings 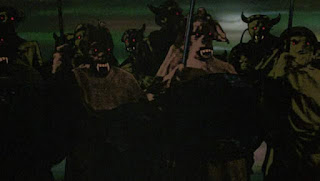 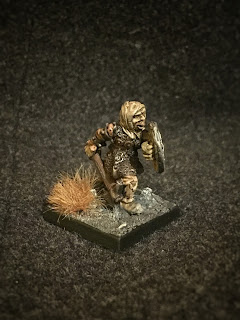 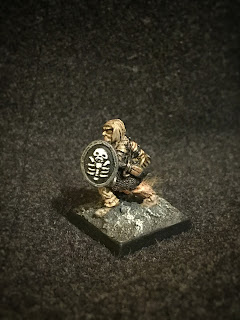 When I got the figure I had planned on removing the shield and adding a cloak but ended up feeling like sacrilege and liked the classic look of the shield, especially as the majority of the Half-Orc range have the same design. 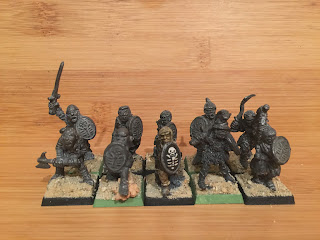 Despite having more than enough to paint (and making a commitment to actually see them painted!) just having one half-Orc didn't seem enough and was able to pick up some more. Rebased Silas as well from 25mm to 20mm!
The plan will be to build a small allied contingent that could be used as part of the elf ambush before Kachas Pass. 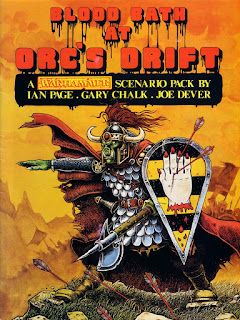 This year I have decided to try and reduce the list of projects pending and focus on starting my Bloodbath at Orcs Drift collection. The 2nd Edition Warhammer Fantasy battle  Scenario is one of earliest memories of wargaming and I have been rebuilding the collection for the last couple of years. 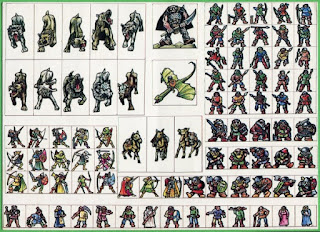 On Card sheets included with the boxed set 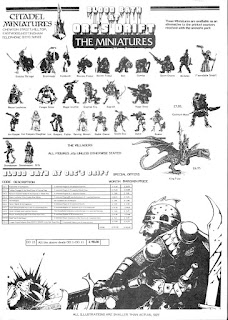 All of the metal figures originally available, including several figures made for the set.

When it was first released I replayed the battles and many others using the card figures included but I  have been collecting the original or close enough (to fill the massed Orc ranks!) and now have the majority of the figures and by weight alone it is over due!

My aim is to build the terrain and paint all the figures, one command sheet at a time and as I had already painted up Guthrum Mane, the Rock giant previously I am starting with the Vile Rune Orc Tribe. 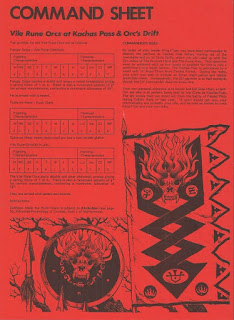 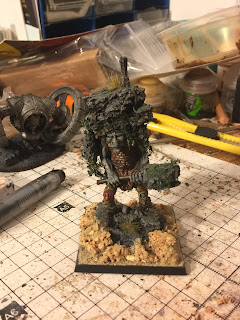 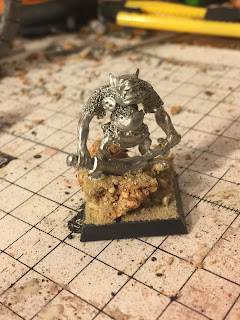 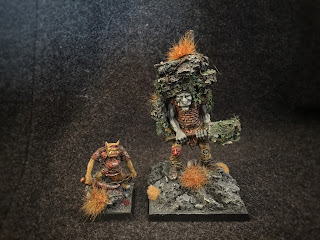 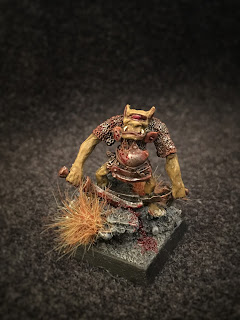 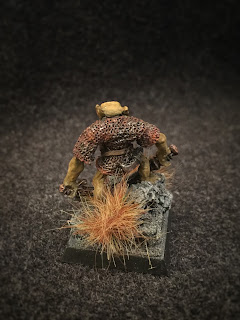 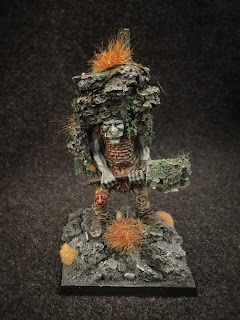 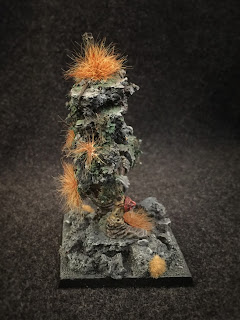 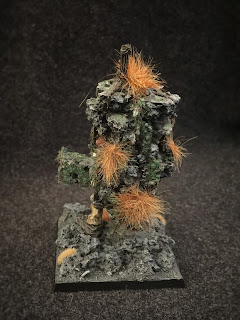 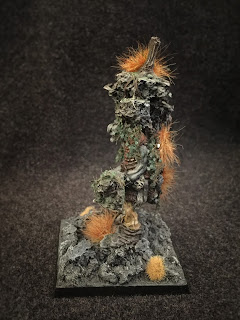 next up will be the 40 strong Vile Rune Orc unit and a start on the terrain...