The Return of Guthrum Mane. Part 2

The hill moved.
Pebbles at first and then as cracks in the earth and stone appeared the tree tilted, its top bending and then breaking off to leave the stumps and increasingly exposed roots.

The hill moved again and stood up.
The stump rose up and clung on to the earth beneath it as if in defiance. Thick roots which had pushed and fought their way into the bedrock now held them close to form a strange crown and cloak of grey and green.
Guthrum opened his eyes and looked around, he had been asleep for so long and the world was not the one he remembered. The stones had sheltered him when he had pulled himself away from the ruin of Orc’s Drift to sleep and heal.The taste of dwarf and elf and human washed away in the haze of battle. The Vile Rune Orcs who had paid him to fight broken and their Chieftain Fangor Gripe cut by burning elf blade.
The sound of roaring dwarfs as the F’yar Guard turned and their king was torn from the sky and plummeted with his Wyvern into the uncaring earth.
He remembered to the roar of the dwarf lord Borinn as the crossbow bolts buried themselves deep into his flesh and the heavy bite of his axe.
The wounds had been deep and his sleep had been deeper as the seasons turned and he became as stone.
The world had ended and the stones had protected him and carried him through the cataclysm to a new world.

'Old world, new world, matters not. Still stone, still food’ he muttered to the stones and went off in search of food. 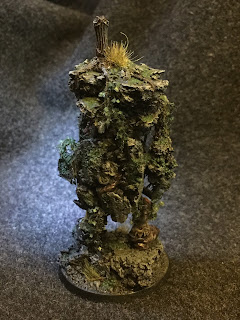 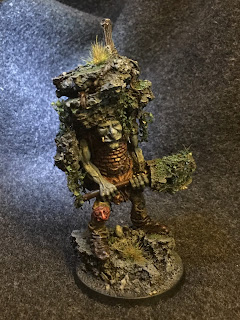 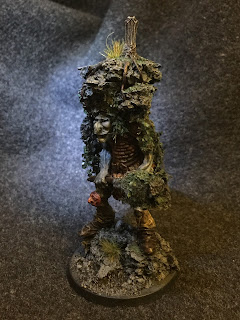 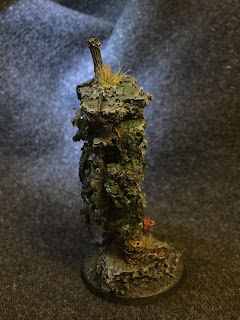 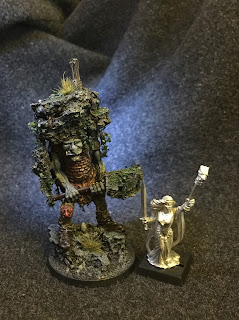 The Return of Guthrum Mane.Part 1

In the sort out of old figures and which to add to the repaint pile I came across a long forgotten giant Hill Troll (1985 designed by Kev Adams) who had featured in Bloodbath at Orc's Drift as Guthrum Mane. 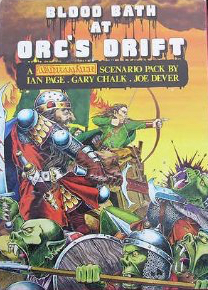 Once he had been cleaned of his old paintwork i decided to try and restore him to his rightful glory and pride of place in my Bloodbath collection ( and also the first piece!) 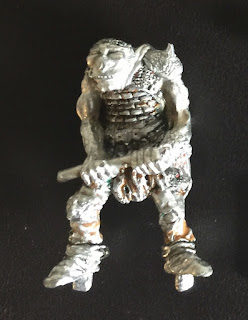 Back in the day he was a big piece but the times have changed at at only 4.5cm tall he wouldn't be looming over much these days. As well as boosting him up on a base i wanted to tap into his Hill troll roots and have him either emerging or carrying bits of hill. Several pieces of Cork, wire and a twig later he had gained another 4.5cm! 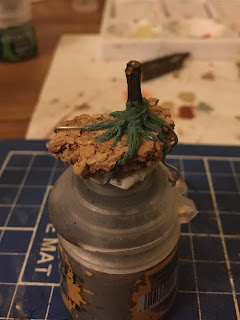 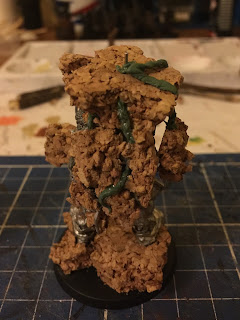 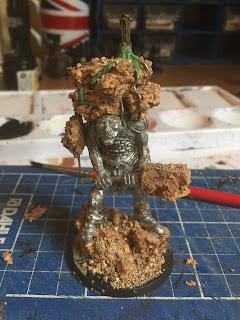 Rather than restore his original bladed weapon with plasticard I decided to add more stone to tie in with the stone theme. Green stuff was used to thicken the tree stump and roots which keep all the stones attached to his back (I like to have some logic and reality to my pieces)
Catch Part 2 for the finished figure...

The planned expansion of my Bretonnian force will include two Trebuchets, I am not sure yet if I am going to build my own and modify some of the Men-at-arms to crew them or go with the GW issue.
I have always liked the idea of sieges and all the extras you can bring to a game because of it so plan to add some siege towers and catering rams as well. These will cost probably be scratch built and have found a nice tutorial which i can base mine off...

Battleground hobbies Siege Tower
Posted by Benamon at 09:59 No comments:

following on from my trip down memory lane unearthing my Bretonnians and their subsequent recruitment drive on Ebay I have also picked up a couple more classics. Hero quest, partly for my own benefit but also to use as a children. 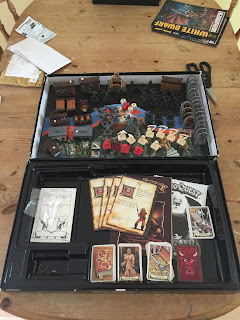 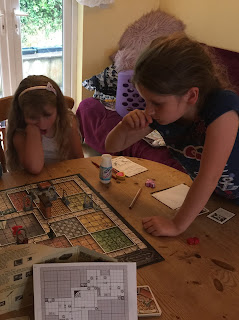 A quick refresh of the rules and going through the opening game they loved it, especially the extra descriptions of creeping down dusty corridors and the cries of Orc's getting taken down!

I also picked up a copy of the Warhammer Fantasy battle rules 2nd Edition. This was my first ruleset and was lost in the mists of numerous house moves and was nice to have it again, though this has also reminded me of the supplement i had with it 'Bloodbath at Orc's drift' and now have something else to add to my wish list! 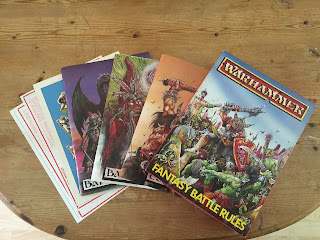 The figure is from the Marauder Miniatures Fighter range and he will stand in as a Paladin on foot.
I remember when i first got the figure and wasn't that keen on him but now is unique look and the chance to get him right this time made him a easy choice for me. As a Paladin i wanted to go for quite a clean minimal look and not distract from the armour too much. For the armour I wanted to avoid the  polished chrome look and be a bit more realistic. 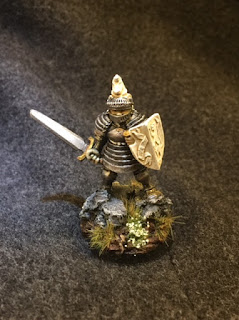 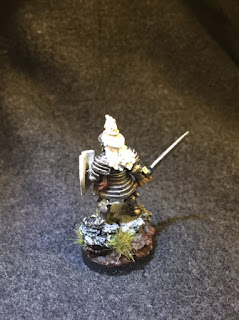 I am really pleased with the base, its my first time using cork and the terrain from the Army Painter range but will use this as the template for the army.
Posted by Benamon at 07:43 No comments:

A return to Warhammer

I have not had much time to post recently, work commitments but also busy painting and reviewing my collection out of deep storage.
The Age of Sigmar has reminded me how much i liked the original fantasy game, this was where I  started with wargaming and I have decided to refresh my Bretonnians as well as pick up a couple of extra units to make them playable. 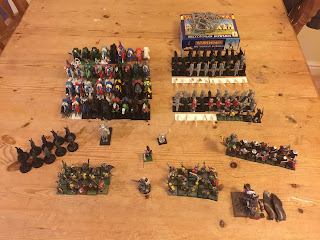 My original army had the original Empire High Helm and White Wolf knights and Empire Crossbow men  and a one of the Regiments of Renown, Red Redemption Chaos Cultists as a unit of warrior monks. I will probably ebay them to fund some units on my wishlist. 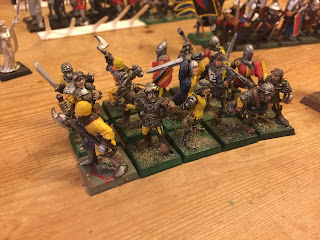 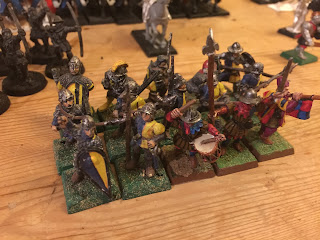 My Men-at-Arms are a mix of early Feudal, Norse and Foot knights which i prefer to the new plastic unit. 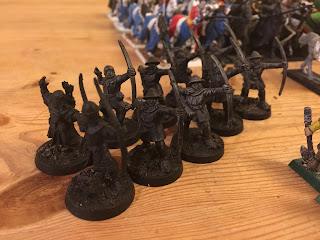 I have been able to pick up a several joblots of Archers and Knights have started on the first unit. I know rebasing isn't compulsory and if they did not need painting i would probably leave them but will a wholesale refurb i have decided on the round bases as it will give me more space to decorate and terrain. To keep the big battalion feel i will look at getting some movement trays for them

Yesterday I was lucky enough to get hold of this weeks White Dwarf featuring the launch of the Warhammer Fantasy Battle successor Warhammer Age of Sugmar and a free Stormcast eternal. 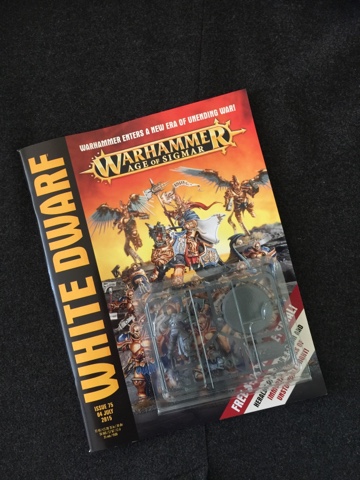 Websites, forums and Facebook are saturated with comments and reviews over the rules and the end of WFB and a general positive for the model, both on its own merits and as a base for conversation. The Eternals have grown on me and I will post up my progress once I get some time to put it together. Size wise, they are big and I am already jotting down some ideas to use one in my INQ28 warband as a Truescale marine 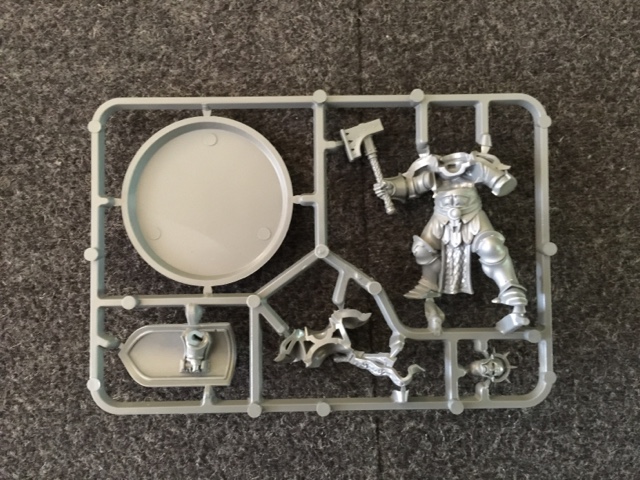 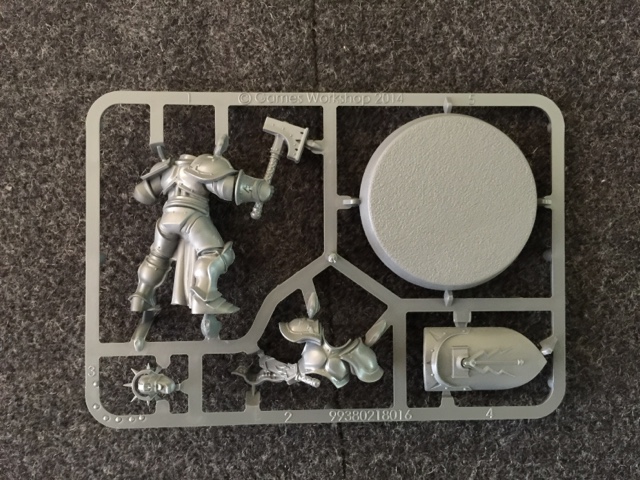 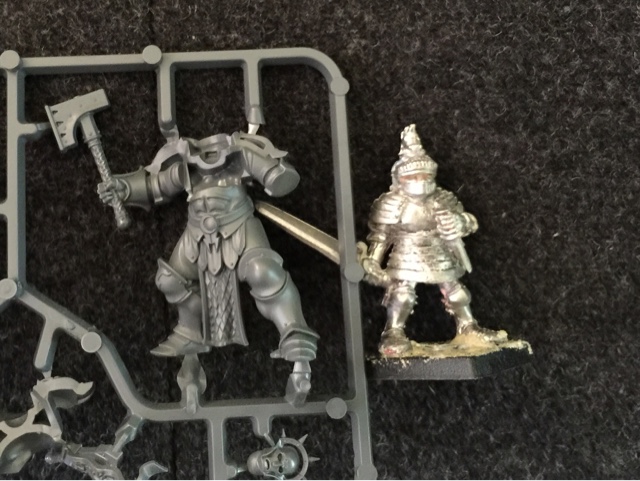 Regarding the rules, I had not played the 8th, though I had picked up a copy, and still have a Bretonnian and Slann ( the original Frogs!) from when I last played so it was nice to see new rules released for the bretonnians so I can still use them in the new game. They are due for a reprint/update so I might incorporate some of the new AOS heraldry into the colour scheme.
Thoughts on the new fluff once I have read it.
Posted by Benamon at 02:15 No comments:

Somnus
[som-nuh s]
noun
1.
the ancient Roman god of sleep, a son of Night and brother of Death.

The airlock chimed its acceptance and the metal hatch slid slowly sideways, its motors slow and sluggish, reluctant to wake and work after so long in the void.
Out of the darkness the stale air fell out, gritty to taste and cold, it carried with it the heavy scent of wet rockcrete as if this led to some dank underhive den. The hint of hysterical exhaustion, regret and loss. A silence that seemed to echo laughter and weeping
At the Inquisitors command, Servo-skulls plunged into the darkness, stab lights dissecting the claustrophobic landscape as they floated ahead to clear the way into the derelict vessel. Red lights gave dark illumination as  ships Armsmen followed the Servo-skulls deep into the decaying labyrinth in search of the source of the siren signal that had called to them.

The Spire of Somnus was an ancient System Carrack that traded in the Agripinaa Sector. The last  registered log recorded it had been hired by an private Archeotech Expedition and was bound for the planet Barant. The Spire itself resembled a tall clocktower or great towered keep, watchful gargoyles and grotesques reached out from star worn sides and its buttressed flanks rose up to an ornamental capstone of tarnished gold and marble.
Deep within the abandoned tower the hibernation caskets had been found, a last refuge for the crew and the remnants of a story played out. The servo skulls slid through the rusted remains of torn bulkheads and barricades. Sensors highlighted damage from weapons fire and impact craters.Time and decay could not hide the violence the ship had struggled to contain.

Barely one casket remained intact from the ancient worry, the rest uprooted and torn aside or pulled down to lower decks through rusted holes. But one was enough; one was all that had been expected. The Sergent-at -arms and veteran Armsmen fanned out into the chamber and the Inquisitor stepped in to check his prize. Armoured hands touching the pitted metal almost reverently as eager eyes took in the dim readouts from the cracked Pict Screen.
“Its weak but its still there. Signal The Anvil of Stars to bring the Spire aboard” he voiced towards the nearest Servo-skull. “The Captain is still here but its too delicate to wake him’
He could have said more but instead his hand reached down and touched his side, feeling the outline of the leather pouch and the weight of the book within it.
“De Marche was right” he forced himself to say under his breath as he turned and moved back through the Spire, as if realising the words would make his decision more real and the path ahead more certain. 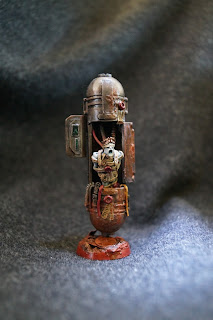 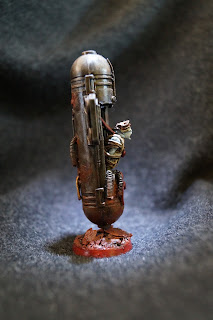 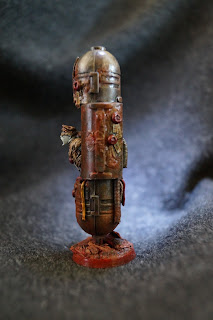 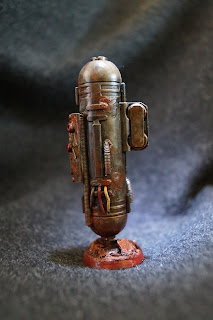 The Deamonhost represents the body of Captain Piter Ellek, possessed by the Tzeentchian Deamon Menethaal, Lord of the Cold Marches.

The Spire of Somnus had been carrying demonic artefacts found on the planet Barant when one of the bound Deamon’s had been released and slaughtered the crew and Archeotech team.The last man standing, the Captain had taken the ship out of warp and trigger the distress beacon before placing himself in Stasis as the Deamon possessed him.