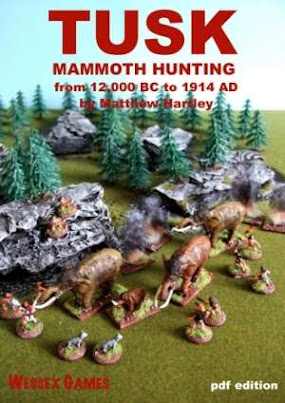 As part of my Prehistoric Project I have collected quite a few rulesets ( 8 so far) and have decided to post up reviews for each of them. This will also give me some material to put on the Youtube channel as well which is looking a little spartan since I set it up...mental note to dig out my Erin Project!
First off is Tusk Mammoth Hunt!
Tusk written for 15mm wargaming and supported by a range of figures and animals by Irregular Miniatures. The rule book is a slim volume, totalling only 12 pages, and provides rules for cave men hunting Mammoths with expansion for more Pulp games featuring Dinosaurs and victorians.
One or more players control a hunting party and the Mammoths are controlled via an AI reaction table.
The rules are clearly laid out and easy to pick up with the basic scenario provided which is a solo game playing in about 15min. 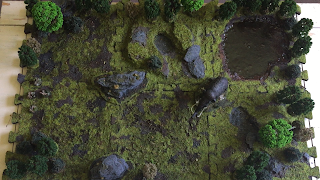 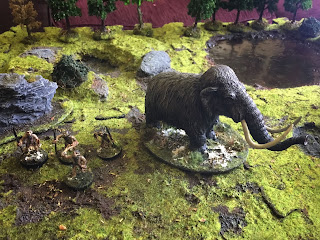 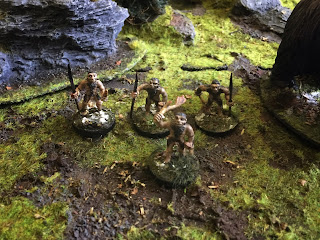 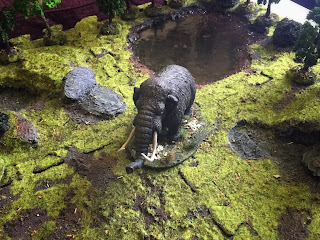 Mammoth
Game play is turn based with actions being limited each round by D6 Actions Points which are spent on movement and Fire starting as well as deciding order of play between players. Ranged and Close combat is followed by the Mammoths turn and an AI Reaction table. Death is quick for both hunters and prey. The AI table, wind direction, fire and variable action points add some random elements and add layers to basic rules and stop it being repetitive
Below I have added some Pro's and Cons, some of which apply to both depending on what you are looking for and bear in mind they are not necessarily flaws, just how the game was designed and targeted.
Pros:
Solo Mode
Quick to learn
Multiplayer Mode
Quick set up
Short game play
Adaptable for a range of beasts
Expansion into Pulp Era/dinosaurs
Cons:
Short game play
Simple ruleset
No Campaign mode
Youtube Play though

Hopefully this has given you some idea about Tusk, the rules and Miniatures can be found following the links below.

Next planned review will be for Neolithic by Ken Hafer